The Tiger Teams Are Off And Rolling. To Where Is Really Unclear!

On the 17th November, 2011 there was a daylong meeting of the Tiger Team which is working to specify what is to be the Consolidated View of the PCEHR.
As it happens a kind soul has made available some of the documents that were used / came from this meeting.
First to provide some context.
It is intended that the PCEHR will be accessed via an Orion Systems Home Page for that particular patient.
There will be a space for the usual controls and for a document list at the left of the screen - some patient ID across the top of the screen and the Consolidated View (CV), which will include access to the Shared Health Summary and then a range of Event Summaries (Discharge Summaries, Test Results etc) will be at the right.
From this point on it would seem the design - which is due to be frozen come November, 30 - would still seem to be rather fluid with a large range of design decisions yet to actually be taken.
The focus of the meeting was on presentation of the clinical information in the screen real estate available - there apparently being confidence the data issues around the contents of all the information were already resolved. Time will tell if this is true.
You can get a flavour of one of the options being discussed from this screen shot. 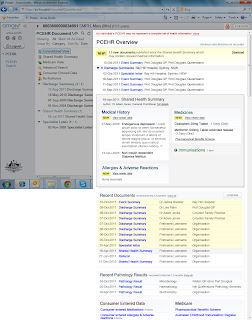 (Click image to enlage)
Now this is all well and good if it was planned to develop and implement the PCEHR over a number of years - but really - in 8 months they are dreaming. To allow for a sensible period of testing this means the whole thing needs to be specified, developed and delivered in six or so months. Really?

If there is one issue that really I struggle with in all this is why we are going for such apparent complexity so early. This is really going for nuclear fission when we are lucky to be only just moving into the steam age!
As I have said more than once why not just have the most basic of Shared Health Records to start off with and then, once that works, slowly add.
I note that this is the approach the UK NHS are adopting:

17 November 2011   Rebecca Todd
A working group is being arranged to consider how additional information will be added to Summary Care Record via GP systems.
A Department of Health SCR Programme Update for October says 73% of out-of-hours doctors using the records feel they have increased patient safety.
But 74% also say that having additional information on the record would increase their ability to make informed decisions.
The update, included in the minutes of a British Medical Association and Royal College of GPs joint IT sub-committee meeting , says a working group is being put together to consider how additional information could be added.
“A working group is being arranged to consider and set a direction of travel for how additional information will be added and maintained via GP practice systems,” it says.
“It is essential that this work has input from the professional bodies and patient groups and that a way forward is jointly agreed by all parties. An initial meeting is being scheduled for November 2011.”
More here:
http://www.ehi.co.uk/news/primary-care/7320/working-group-to-consider-scr-add-ons
Worse I really can’t fathom just how, as this record develops from a recently established record to the longitudinal life-long record just how material can be organised, searched and ordered in useful ways. 10 years of pathology results from a complex patients- some discrete and some in other formats - seem to me to be a real challenge to manage, sort and so on. Just how much of the record needs to be reviewed when a patient is first encountered is also an interesting question.
I really think we need to walk before we run. There are already standards for a simple Continuity of Care record from the US and the Shared Care Record from the UK. Surely we could start here rather than taking this over-engineered and almost certainly doomed to fail approach.
The number of open issues identified by the Tiger Team on the CV just two weeks before was due to be finalised makes that utterly clear.
NEHTA and DoHA think again before it is too late. You might just be able to snatch victory from the jaws of defeat!
David.
Posted by Dr David G More MB PhD at Sunday, November 27, 2011

A correction: "It is intended that the PCEHR will be accessed via an Orion Systems Home Page for that particular patient."

Actually, it is intended that the consolidated view may be accessed through any compliant system, one of which will be the official PCEHR portal developed by Orion.

"just how material can be organised, searched and ordered in useful ways. 10 years of pathology results from a complex patients- some discrete and some in other formats - seem to me to be a real challenge to manage, sort and so on."
What if you could do a "google like" search on the patient's record? Allow the doctor to find the relevant information quickly.

Google works well if you know what you are looking for - not quite so good highlighting what is important in a particular circumstance.

Also remember Google is a 'crowd sourcing' way of finding relevance - this does not work all that well with only one or two users!

We were initially told that the Tiger Teams will deliver their specifications by tomorrow (30 November). AFAIK there is not one of them that will deliver by that date. In fact most of them are nowhere near close to implementable specifications.

Dear Tuesday, November 29, 2011 1:09:00 PM the tigers are going to be a bit late. They are busy sharpening their claws and getting ready to rip your heart out!

More likley they are getting ready to roll over and have their tummies scratched by NEHTA.