Why The Government will Never Fund a Shared EHR – And Probably Shouldn’t.

As regular readers of the blog will know development of a National Shared Electronic Health Record (SEHR) has been some form of Holy Grail for the e-Health bureaucracy and for many government e-health strategists and planners. Indeed it is no secret that NEHTA is developing such a project. From their web site we read:

NEHTA is working to develop specifications and requirements for a national approach to shared electronic health records. These records will enable authorised healthcare professionals to access an individual's healthcare history, directly sourced from clinical information such as test results, prescriptions and clinician notes. The shared electronic health record will also be able to be accessed by individuals who have received healthcare services.

Specifically, NEHTA will focus on developing:

• Policies, requirements, architecture and standards for a national approach to shared electronic health records; and

• A business case to substantiate and validate the proposed approach.

For the health system within Australia to reap the full benefits from the IT, governments and healthcare providers need to make the case for undertaking further investment including the development of a national system of shared electronic health records. The case for the required level of investment depends on the credible quantification of the costs and benefits of providing such.”

I understand that NEHTA plans to have developed the SEHR business case ready for submission to the Council of Australian Government (COAG) sometime in 2008. I would be prepared to wager a whole days wages they will not get approval to proceed to implementation, but will concede there may be some funding provided to have NEHTA (or someone else) go ahead to develop some more detailed plans and costings.
Before considering the possibility of SEHR Project success and funding we need to identify what is being proposed. From the most recent NEHTA presentations we see the following: 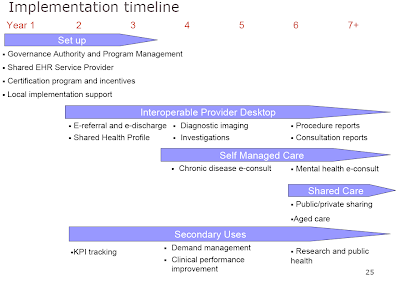 So from when funding is approved to proceed with the total project – probably in 2008 / 9 at the earliest - we will have the following happening. First two years of set up, certification, planning and procurement of a SEHR provider – to 2011 – and then over the next five years a rollout of an interoperable healthcare provider desktop. Starting in 2013 it is also planned that remote e-consultation will begin.

Can I say that the whole plan has a total air of un-reality and fantastic (in the real sense) wishful thinking about it. Among the realities that need to be faced are the following:

Firstly the present Federal Government has had over a decade to consider a major investment of this sort on Health IT and has not done so – what has suddenly changed that a 2008 proposal would suddenly meet acceptance? The answer is not much. If Government changes at the end of the year then all bets would clearly be off ( and planning would start again most likely ) and if it does not I suspect the 2011 election would see change – and a long and detailed review would be inevitable. Timing thus seems less than optimal at best.

Secondly large scale top down complex IT projects – in mixed health sector funding environments – are likely to be very problematic. The only examples of success in such a strategy are Kaiser Permanente (and a couple of similar managed care entities in the US) and the UK NHS. Both of these projects have proved to be both quite expensive and very difficult to manage. The other successes at a national scale have been in countries like Denmark and the Netherland where a messaging based bottom up relatively simple, standards based and incremental strategy has been successful. The co-operative disseminated model adopted by Infoway in Canada also seems to be progressing reasonably well and is possibly the closest match to the Australian situation.

Thirdly no Government in their right mind would invest in a SEHR project of the type presently proposed without some very substantial pilot and trial implementations at considerable scale. At the very least an implementation of the scale of a smaller state (say South or Western Australia) would be required to provide a credible ‘proof of concept’. This pilot / trial would take at least two years to be planned, implemented and evaluated. Given the abysmal failure of the various HealthConnect pilots – and the consistent withholding from public review of any detailed evaluation reports – success in this pilot endeavour could hardly be guaranteed. To not conduct a rigorous pilot / trial would, of course, be the height of folly and exceptionally high risk. It is not clear where this is planned to be undertaken on the NEHTA timetable shown above.

Fourthly there is a major project risk which is in-escapable in projects of this type. That is the inevitable political interference that is seen with large public projects and the difficulty of preserving direction and focus over many years required to deliver satisfactory outcomes. It is hard to think of any major Federal Government computer systems which have met both financial and planed time-lines. An additional risk, which should not be minimised, is the technical and system integration risk. As anyone with experience of the Health IT field will confirm very often interoperable simply isn’t (despite the use of recognised Standards) and much work is needed to make it so!

Fifthly at present the scale of costs of such a project – extending over at least four to five years – is essentially unknowable until the pilot implementations are complete. Any business case prepared before such information is available is likely to be more wishful thinking than fact. Associated with this issue is the lack of clarity as to what would be invested in and who would be investing in what and who would be paying for what. It seems improbable that such a major infrastructural upgrade will be willingly paid for by the users – i.e. GPs, Specialists, Hospitals and Diagnostic Providers – without some major cost recovery mechanisms being in place that obviates their financial risk.

Sixthly there will be a problems with having Hospitals and GPs / Specialists / Diagnostics in the private sector (they have most of the information that is to be shared.) being co-ordinated and managed in terms of information flows, implementation timetables and investment levels by NEHTA / Government.

Seven, any Shared EHR will inevitably face the privacy, confidentiality and consent issues associated with projects of this type, where the is always lingering public doubt as to just who can access the shared records and what control the patient has over such sharing. A program to convince a sceptical public of the benefits of a project of this sort will be neither brief or cheap.

Eight, right now there is a total lack of a credible business case that actually explains what will be paid for and who will pay. It is all very well to assert that there will be vast benefits from clinical decision support and e-consultation but until all the assumptions regarding the technology(ies) and capabilities to be deployed, what information is shared and what remains on local systems, who will be the users of these new systems, how the transition will be funded and managed and how the required knowledge bases are acquired and maintained credibility is severely stained at best.

Nine, while a simple PowerPoint slide can illustrate the concept of a SEHR the length of time and the level of work required to have even the smallest amount of health information sharable across a national entity (e.g. the UK) shows this is an undertaking of very considerable complexity, which is underestimated at considerable peril. Remember the basic idea has been around in Australia since 2000 / 1 and real progress towards a working outcome has not been impressive to date.
Last it needs to be appreciated that the development of a transition plan to take Australia from a wide variety of partially linked disparate client systems to a reasonable number of certified high quality client systems with rich functionality all supplying appropriate standardised, reliable information to some central SEHR securely and privately will of itself be major and as yet unaddressed and unfunded task.

What should be done instead?

With adjustments to suit our local Commonwealth / State divide it seems to me a national strategy based on locally based health information sharing initiatives on a background of proven Standards and compliance certification has the highest probability of success – especially when combined with an appropriate benefits re-distribution strategy to ensure those who are meeting the costs are rewarded for their efforts.

We could learn from ONCHIT in the US and let three or four contracts to build demonstration systems based on established standards and take the best features of each to develop a scalable bottom up approach that could then be rolled out at relatively low risk. These would be project managed commercially and their outcomes fully evaluated in public.

I am also strongly persuaded of the truth of the argument that real benefits are predominantly derived from advanced (Level IV) system and that the key to real benefits lie in standardised basic information sharing between advanced client systems. Secondary data sharing also needs to be part of the mix to ensure public health and post marketing surveillance of medication side effects (as well as bioterrorism) are effectively addressed. A top down strategy is almost certain to fail in the Australian environment and we would be better to go down a path that involves the determination of client functionality required, development of appropriate certification processes and standards and have the private sector develop and support appropriate systems. There could also possibly with an initially government funded Open Source alternative that could be developed, supported and provided at low (but reasonable) cost and maintained as an exemplar of what is required. This strategy could provide an incentive for commercial system developers to ‘out develop’ the basic system to demonstrate the additional value provided by their offering.

The total funding of any national SEHR at the COAG meeting in 2008, based on the current plans, seems to me to be ‘courageous’ in the extreme. Cooler heads need to prevail and a strategy suitable for Australia in 2008 to 2018 and beyond needs to be developed free from the unsuitable large scale SEHR proposal that seems to currently be dominating NEHTA thinking.