Here Is The Press Release On The #myHealthRecord Date Extension From Minister Hunt! 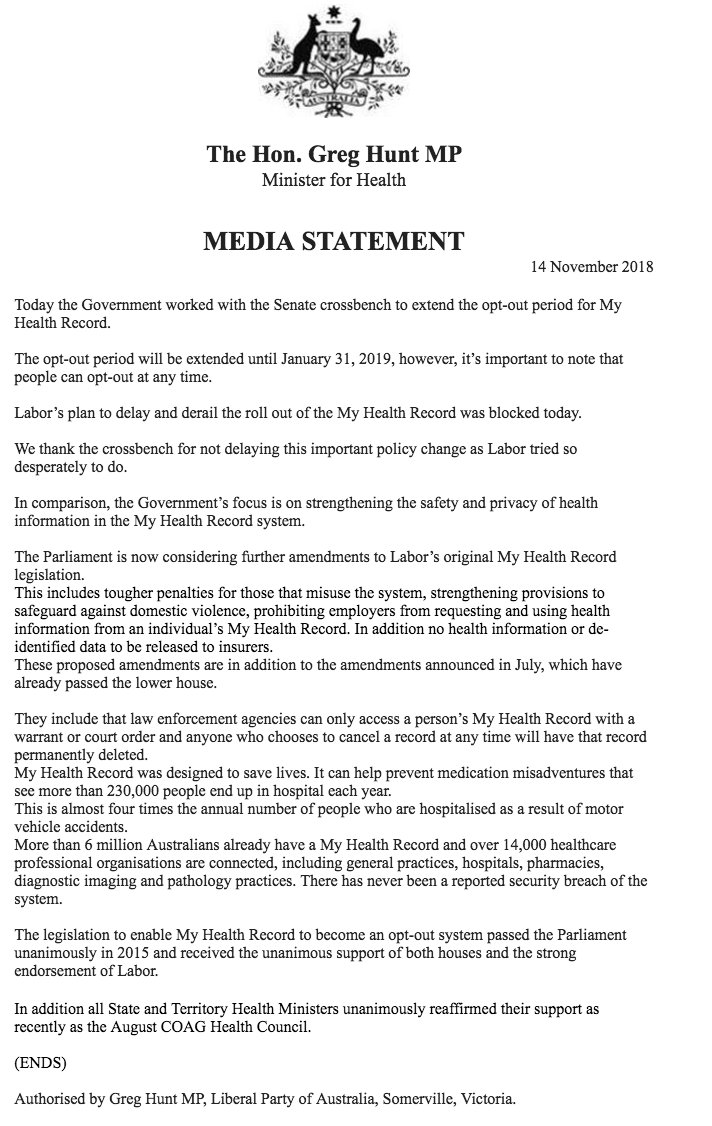 What an unmitigated disaster of a roll out. A series of unfolding embarrassments for the government as it hurtles towards a federal election. And we know that digital health issues can help bring down governments - EPAS anyone? So at what point does the ADHA CEO fall on his sword?

re So at what point does the ADHA CEO fall on his sword?

If he tried, he'd probably miss.

I was on Channel 10's Studio 10 this morning. At the end, Angela Bishop echoed and stressed what I'd said - legislation is weak protection of patient privacy. Future governments will be able to change it. The panel agreed and three out of four will be opting out. I suspect the one who said he would just let it happen, was trying to present a balanced view.

Previously it's been the broadsheets and the ABC who have asked for comment. In the past three days, I've been interviewed by 2GB, Channel 10 and 2WSFM (a Sydney golden oldies radio station). Their audiences seem to be people who have suddenly found out about myhr and the opt-out initiative. Hence the sudden increase in people opting out.

It speaks volumes about the pathetic media campaign run by ADHA. If they don't do a good job between now and the end of January 2019, the same thing will happen - a last minute rush to opt-out and demands to extend the opt-out period.

On the other hand, if they do a good job, the opt-out rate will go high and stay high and there will be demands to extend the opt-out period.

Stumbled upon your Studio10 appearance Bernard whilst channel surfing - think you gave some of them and their audience a wake up call, although Angela has been a vocal critic for some time, wisely very wary of the whole thing. Well done.

The centralised document store simply misses the point of health information accessibility. As a patient yes I want to be able to access and allow my care team access, but via trusted means using modern approaches. I don’t need it copied to a single place, just need an app(s) that enable me or my care team to pull it up from wherever it is. The Government has held this up for to long now.

People like Tim Kelsey, Bettina McMahon, Roman O’Conner the Depertment can’t grasp this, they learned ehealth 10-15 years ago but have not kept pace, rendering them as useful as a fax on a bull.

I agree collectively these three have not been a good investment. MyHR expansion and opt out communications has been a shambles at best. The continued reports of an organisation that is broken and clear evidence that there are many who have been victims of bullying from inadequate management. We now the Agency is restructuring to make itself more efficient and effective so now would be an optimal time to cut loose a number of Executive General Managers and General Managers.