This Is What Is Actually Called Deliberate Deception Of The Public. It Is Appalling, Dishonest and Heads Should Roll If True.

The Guardian has outdone itself this week with a ripper of a leak on the #myHealthRecord.

Christopher Knaus and Nick Evershed
Government officials were warned a “significant” technical glitch affecting the My Health Record system threatened to leave patient information incomplete or out of date, a leaked briefing shows.
The My Health Record system relies on doctors and medical practices using their own IT systems to upload clinical information about patients, to help ensure continuity of care and improve interactions with healthcare providers.
An internal briefing to the Australian Digital Health Agency’s data integrity group last month, obtained by Guardian Australia, shows that a software bug began to affect the system in early 2016, which prevented some clinical information systems used by medical practices “from uploading clinical documents to the My Health Record system”.
The briefing said the error had the potential to cause “missing clinical information in a consumer’s My Health Record” and “amendments not uploading resulting in out-of-date or incorrect information”.
“When the digital signature issue emerged in 2016, its impact was so significant that it was escalated to the minister for health, and although the issue is being managed it is not completely resolved,” the leaked briefing, dated 18 December 2018, said.
But the agency, in a statement to Guardian Australia, has strongly denied any suggestion the 2016 software bug compromised patient records, saying it affected only a tiny proportion of documents and did not leave My Health Records with missing or out-of-date information.
“The matter you refer to accounts for less than 1% of attempted document uploads from clinicians,” a spokeswoman said. “The agency rejects any statement that the security or safety of the My Health Record system has been compromised.”
Neither the minister, then Sussan Ley, nor the agency publicly announced the error.
The agency has also strongly denied any suggestion that the issue is still unresolved, despite what is written in the briefing. It said the bug was quickly dealt with in 2016.
“To be absolutely clear, the agency rejects any assertion that there is any clinical risk to patient safety or long standing problem unresolved since 2016,” a spokeswoman said.
The briefing document suggests that, in some cases, medical practices using older software were oblivious to the errors.
“The detectability of this error depended on the clinical information system and the implementation of error reporting,” the agency’s briefing said. “Some clinical information systems did not display an obvious error message. Therefore some healthcare provider end-users may still be using clinical information software with this issue and not be aware.”
This claim has also been denied by the agency, which says medical practitioners were alerted every time an upload to the My Health Record system failed, regardless of the software they were using.
“All clinical software alerts the organisation if a document fails to upload into the My Health Record,” the spokeswoman said. “Any claim to the contrary is false.”
The agency identified a fix but it relies on third-party software makers and IT workers in hospitals, doctors’ offices and other healthcare locations to implement it.
Last month’s briefing said some doctors were still using the old software.
“Vendors were then advised of the issue and how to resolve it, however many healthcare providers are still using clinical information systems with the issue rather than the corrected versions created by vendors,” the briefing said. 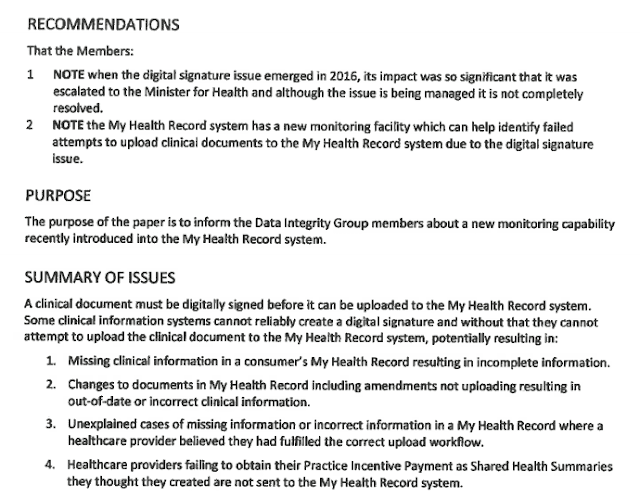 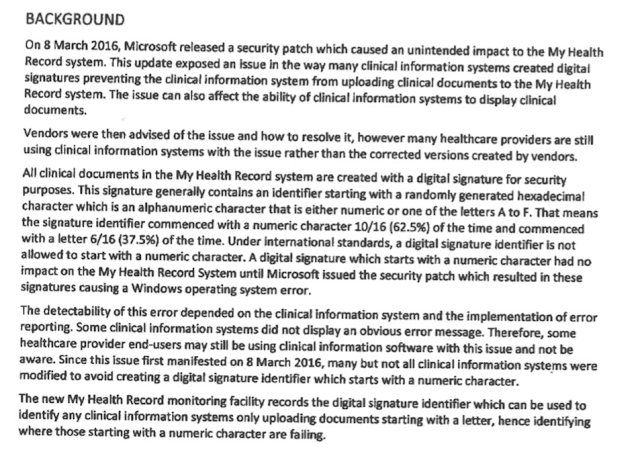 Extract 2.
If true – and the docs look just like most government minutes etc. I have seen in both tone and content (and I have seen and created many) - they are dynamite!
The ADHA has known about some faults causing upload errors of data to the myHR, has not disclosed the fact, and years later has not remedied the problem. It is as simple and wrong as that!
How dysfunctional and careless can a Government Agency be. The ANAO Audit should look into this.
David.

You have to question how reliable and valid this so called “delete” function is the supposedly implemented but I am not I can find.

Agree this cannot be an isolated issue, this level of negligence is a result of a very serious collapse in discipline and leadership. Tim Kelsey is obviously the queen bee to an army of cloned drones that have slowly but surely run out of time and the unmaintained playform and it’s supporting designs are failing and falling apart.

THE man who led the dumped UK digital health record system has been put in charge of Australia’s bungled $1 billion e-health record and is being paid as much as the Prime Minister to fix it.

Former journalist Tim Kelsey will be paid a total remuneration package worth $522,240 a year, almost the same as Malcolm Turnbull and just shy of the $548,360 paid to the Chief of the Navy and more than the Chief Scientist, the head of the Fair Work Commission and the Inspector General of Taxation, a remuneration tribunal determination reveals.

The Department of Health stated that Mr Kelsey is uniquely suited to the role because of his experience with data and digital platforms in health and personal privacy.

The Care.data scheme to store patients’ medical information in a single database suffered multiple delays and was then scrapped after major problems emerged over patient confidentiality.

It was similar to Australia’s My Health Record that Mr Kelsey will now oversee.

Concerns emerged in the UK because people were not aware they had to opt out to protect their privacy and there were fears the information could be sold to pharmaceutical and insurance companies.

It looks legit David and the Microsoft aspect is factual. The data integrating group or DIG had me suspicious at first but then the ADHA has trivialised pretty much everything with marketing spin and silly slogan driven storyline’s so I am pretty sure this is the real deal.

If it is a fraud then it is a very well crafted one written by someone who knows the domain. But then the ADHA has sought to defend itself and lay the ground to pass the buck to the clinical software community.

As you rightly call-out heads should roll, the right heads, but sadly more than likely it will be those who raised the issue rather than those who tried to bury it.

THE man who led the dumped UK digital health record system has been put in charge of Australia’s bungled $1 billion e-health record and is being paid as much as the Prime Minister to fix it.

Hmmm I guess “fixing” is not a well defined term and means different things in different universes. These two NHS refugees have not done all that well really, bit of a calamitate summa completa.

Odd then to read this morning that ADHA was so quick to act when informed of a colour of a screen-button on a clinical system. Especially as the one who raised it would have been responsible for this major software failure. Still who cares if the house is falling apart so long as the curtains match.

Says a lot about the ADHA mistake.

Talking about deception..... The ADHA confirmed access by ambulance paramedics is "not activated yet"

The Government says the $2 billion My Health Record will save your life
in an emergency but there are major problems with that claim - ambulance
paramedics can’t access the record.

Paramedics are often the first responders in a medical crisis and
information on the My Health Record about a person’s medical conditions
and medications could be crucial in determining how to treat them in an
emergency.

However, News Corp has contacted ambulance services in every state only
to be told they can’t access the My Health Record.

The Australian Digital Health Agency, which runs the record, confirmed
to that more than six years after the record was launched, access by
ambulance paramedics is “not activated yet”.

Worse still, one in four of the nation’s hospitals and health services
aren’t connected to the system so they can’t use it when a patient comes
in an emergency.

News Corp has contacted ambulance services in every state only to be
told they can’t access the My Health Record.

And the president of the Australasian College of Emergency Medicine Dr
Simon Judkins says the IT system in many public hospitals are so poor
doctors in emergency departments can’t access the record anyway.

“No, it’s not widely used. Some emergency departments have My Health
Records but it hasn’t been widely advertised and if you log on and there
is no information on it you are less likely to use it,” he said.

Every Australian will have a My Health Record automatically created for
them from February 1 unless they opt out by midnight on January 31.

The record will reveal if a patient has a mental illness, a sexually
transmitted disease, had an abortion or is impotent and privacy experts
have raised major concerns it could be vulnerable to hacking.

Already there have been 88 data breaches involving the record and over
one million Australians have opted out of the system.

As de facto Health Minister for today I am announcing that I have instructed my Department and the Digital Health Agency to extend the Opt-out date until after the Australian National Audit Office have tabled their Audit of the My Health Record due in October 2019. The government will then consider the Auditor-General's Recommendations before setting a date for the end of the Opt-out period.

Turn your attention to breaking ness out of Queensland Health. Tip of the iceberg? House of cards collapse in th making?