Here is the release: 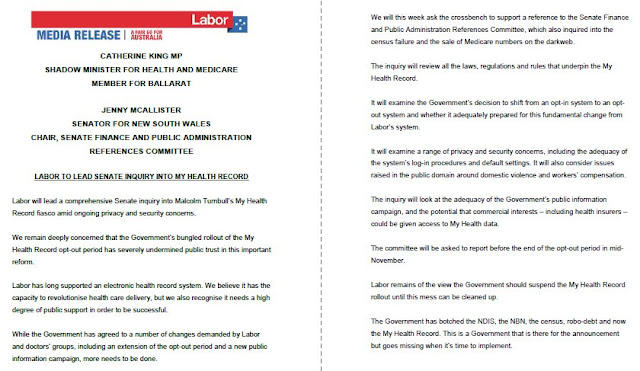 Here is the text in easier to read format:

Labor will lead a comprehensive Senate inquiry into Malcolm Turnbull’s My Health Record fiasco amid ongoing privacy and security concerns.

We remain deeply concerned that the Government’s bungled rollout of the My Health Record opt-out period has severely undermined public trust in this important reform.

Labor has long supported an electronic health record system. We believe it has the capacity to revolutionise health care delivery, but we also recognise it needs a high degree of public support in order to be successful.

While the Government has agreed to a number of changes demanded by Labor and doctors’ groups, including an extension of the opt-out period and a new public information campaign, more needs to be done.

We will this week ask the crossbench to support a reference to the Senate Finance and Public Administration References Committee, which also inquired into the census failure and the sale of Medicare numbers on the darkweb.

The inquiry will review all the laws, regulations and rules that underpin the My Health Record.

It will examine the Government’s decision to shift from an opt-in system to an opt-out system and whether it adequately prepared for this fundamental change from Labor’s system.

It will examine a range of privacy and security concerns, including the adequacy of the system’s log-in procedures and default settings. It will also consider issues raised in the public domain around domestic violence and workers’ compensation.

The inquiry will look at the adequacy of the Government’s public information campaign, and the potential that commercial interests – including health insurers – could be given access to My Health data.

The committee will be asked to report before the end of the opt-out period in mid-November.

Labor remains of the view the Government should suspend the My Health Record rollout until this mess can be cleaned up.

The Government has botched the NDIS, the NBN, the census, robo-debt and now the My Health Record. This is a Government that is there for the announcement but goes missing when it’s time to implement.

I hope the Senate looks at all aspects of the myHR. There is a real case for scrapping the myHR and taking a totally new approach.

If the Senate does not start from the position that all options for the myHR's future are on the table it will be a profoundly useless inquiry.  The risk is that it will wind up being a politically driven inquiry. Given Labor is pretty likely to be in Government after the next election then myHR will become their problem - so they better think carefully how they are going to proceed. They may be at risk of creating a large millstone around their neck!

I hope they seek out some experts, not the usual mob, but those who toiled away in the background and have been silenced.

The disappointment in this communique is that Labour seem to think that a review can be done before opt out period ends. Surely the whole project should be suspended until a complete review is done and the promised changes are implemented?

One of the biggest issues has been the project has been allowed to stagger on uncontrolled through numerous reviews and simply ignores them.

I think the future Health Minister can and should put more pressure on the department. After all there is a good change her tenure will be spent dealing with the consequences.