I believe this was drafted by the Greens. 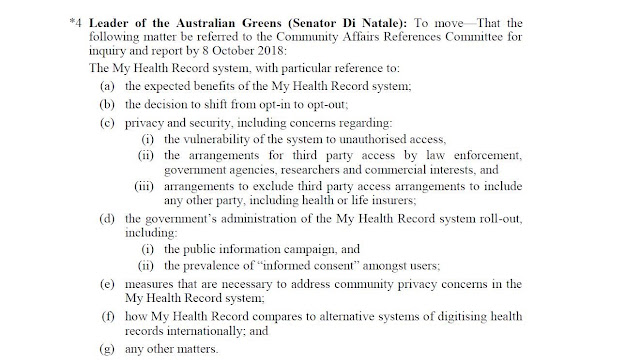 Given clause g looks good to me!

SENATE ADOPTS LABOR’S PLAN FOR AN INQUIRY INTO MY HEALTH RECORD
The Senate has agreed to Labor’s proposal to subject Malcolm Turnbull’s My Health Record fiasco to a comprehensive inquiry amid significant ongoing privacy and security concerns.

We remain deeply concerned that the Government’s bungled rollout of the My Health Record opt-out period has severely undermined public trust in this important reform. That’s why we proposed an inquiry on Tuesday.

Labor has long supported an electronic health record system. We believe it has the capacity to revolutionise health care delivery, but we also recognise it needs a high degree of public support in order to be successful.

While the Government has agreed to a number of changes demanded by Labor and doctors’ groups, including an extension of the opt-out period and a new public information campaign, more needs to be done.

We are disappointed the Greens did a dodgy deal with the Government to truncate the inquiry but Labor’s terms of reference remain intact.

This will be a wide-ranging inquiry that will review all the laws, regulations and rules that underpin the My Health Record.

It will examine the Government’s decision to shift from an opt-in system to an opt-out system and whether it adequately prepared for this fundamental change from Labor’s system.

It will examine a range of privacy and security concerns, including the adequacy of the system’s log-in procedures and default settings. It will also consider issues raised in the public domain around domestic violence and workers’ compensation.

The inquiry will look at the adequacy of the Government’s public information campaign, and the potential that commercial interests – including health insurers – could be given access to My Health data.

We encourage everyone with a view on the My Health Record to make a submission to the inquiry.

Labor remains of the view the Government should suspend the My Health Record rollout until this mess can be cleaned up.

Well the opposite health minister had concerns from the start and called out issues with the appointment of Tim Kelsey. http://medicalrepublic.com.au/peak-digital-health-agency-bigger-disaster-census/4868

Point F is a good inclusion

Liberal frontbencher James McGrath said the committee would show the benefits for patients and doctors.

"This reference will also provide an opportunity to address any misconceptions or concerns about the My Health Record system," Senator McGrath said.

Oh so another instrument of government is being told the outcome they need to reach. What is happening to out country?

Just another example of instead of focusing on what might be best for all Australians they will instead turn this into another shouting match.

Who is the Labor blaming for deficient functionality, privacy & utilisation?
Let's investigate…
Q1) Who started it ?
A1) Labor minister Nicola Roxon announced it in 2010 (the 2010/11 budget).

Q2) Which party was in government while it was being developed including overseeing the basic structure, functionality, security, privacy, collaboration, education and training?
A2) Labor, it went live 1 July 2012.

Q3) Who decided to remove the need for individual identifiers of clinical staff from the system so that only organisation identifies would be recorded?
A3) Under a Labor government, the contracted project was abandoned when it was failing to meet expectations.

Q4) Who was in government for about 15 months after it went live to review, start fixing problems and set things in motion?
A4) Labor.

Q5) Who set the default security settings?
A5) Labor.

Q6) Who first said they wanted to share/sell data for research?
A6) Labor.

Q7) Who believed the wildly exaggerated claims of expensive consultants claiming the PCEHR could save the health system Billions of dollars per year (based on wrong assumptions)?
A7) Labor.

Q8) Who conducted trials to test the claimed benefits compared to the costs & risks?
A8) Oops, Nobody. Nothing but spreadsheet exuberance and a few anecdotal case studies with no peer-reviewed research.

Q9) Who proceeded with the PCEHR despite no trials being conducted that could properly estimate the benefits, costs and risks of the final implementation?
A9) Labor, Liberal et. al.

Q10) Who believes the answer to a lack of usage and a lack of benefit is to ignore problems and hope that more advertising will make all our dreams come true?
A10) Labor, Liberal, ???

Q11) Who decided that the answer to poor utilisation would be to just make the denominator bigger (Opt-out)?
A11) The Liberal+Nationals Coalition.

Q12) Who decided to change the legislation based on initial Labor desires (eg. universal use; research data), reviews and desired changes?
A12) The Liberal+Nationals Coalition for better or worse.

Q13) Who's had about 5 years to slowly add some functionality and changes to make small improvements with not much to show for it?
A13) The Liberal+Nationals Coalition.

You can't blame the next guy for your own failures. However, all sides don't really understand the detail.

The Health Department needs to pull the plug immediately. Listening this morning to a radio interview, the ADHA reps are all over the shop. They are painting a poor picture of GP’s, one almost got the feeling the ADHA thinks doctors still apply bleeding to cure the cold, drill holes in head to extract bad spirits and surgeons are measured on how quickly they can apputate your appendage with a hack saw.

They seem now to be claiming that which is not yet law and not technically proven - access constraints and deletion of records.

I had not taken to much notice before, but listening and reading this Digital Health Agency are the biggest clinical risk out there. They need to be stopped

@9:35PM, yes both parties may have been in government over the past 9 - 10 years but it is not useful to blame the fly-in fly-out workers for the state of the mine. The department is the accountable office and their new found Agency which is just a rehash of the eHealth branch. Minister Stunt maybe a fool, but probably an honest fool.

The CEO, COO and their little arming of general managers running everything from HR to IT are the cancer that needs to be removed and the Digial Health Agency needs to be extracted from the department and established as a NGO fully funded by COAG